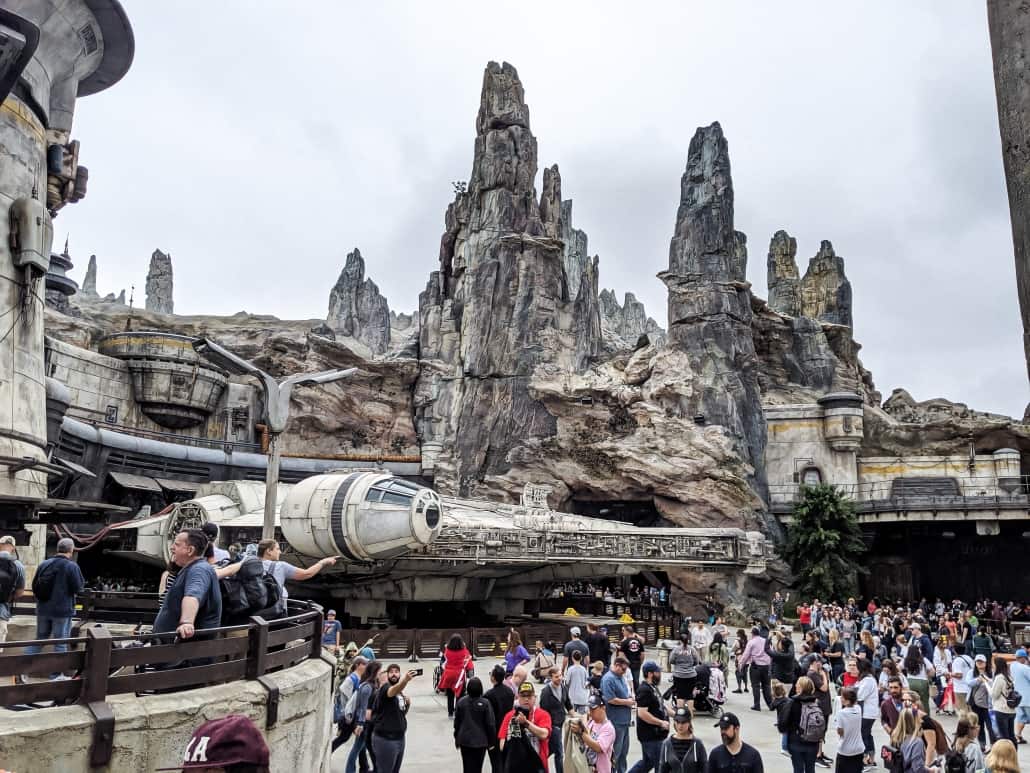 This month, IDG’s #SundayFunday goes to Batuu, a planet in a galaxy not so far, far away. For those who haven’t yet visited or read up on the much-anticipated opening of Batuu, it’s also known as Star Wars: Galaxy’s Edge at Disneyland in Anaheim, California. Although Disneyland always strives to immerse you in the fantasy with their constantly-in-character cast members and themed food offerings, no part of the park has ever been nearly as immersive as Galaxy’s Edge. Every set piece, prop, cast member, and souvenir is entirely dedicated to making you believe that you have truly arrived at the Black Spire Outpost on planet Batuu.

The most breathtaking part of the experience is the sheer scope and detail of the land. From towering mountains to massive buildings and full-scale transports, Disney will have you believing that you’ve left Earth and have arrived at an intergalactic trading outpost. The souvenirs and food are cleverly incorporated into stalls that line the walls of the marketplace, and each stall is filled with intricate, minute details that will take numerous visits to notice fully. From the restrooms to the water fountains to even the trash cans, everything has been specially designed to provide you with the most immersive and authentic Star Wars experience possible.

One aspect of Galaxy’s Edge that has been the subject of the most public debate and anticipation is the food. Since you’re on Batuu, and not at Disneyland, there’ll be no candy apples or churros here. Instead, you can choose from pita-wrapped sausages called Ronto Wraps, Kat Saka’s sweet-and-spicy Kettle, and even Luke’s Skywalker’s favorite Blue Milk. The Coca Cola beverage products even come in specially-designed spherical bottles complete with Aurebesh writing. The purchasing experience itself also strives to maintain the fantasy: instead of paying for things in US dollars, merchants charge you in credits. Anxious to try the Green Milk seen in The Last Jedi? That will run you 8 credits ($7.99).

As of opening, Galaxy’s Edge contains one ride called Millennium Falcon: Smugglers Run (the second ride, Rise of the Resistance, is set to open in August). Smugglers Run allows guests to take control of the iconic Millennium Falcon in one of three roles and attempt to transport illegal cargo for space pirate Hondo Ohnaka. After receiving instructions from an animatronic Ohnaka himself, guests walk through the Millennium Falcon’s interior and receive their flight crew assignment: pilot, gunner, or engineer. While waiting for your flight crew to be called to board, guests can explore the inside of the Millennium Falcon. You can even sit at the Falcon’s Dejarik board where Chewie faced off against C3PO all those years ago.

Once called for your mission, you are escorted to the Falcon’s cockpit, where you are seated in three rows of two according to your given role. Pilots, seated in front, are in charge of controlling the ship’s direction (and pulling the lever to jump to light speed!). Gunners shoot at attackers by pressing a series of illuminated buttons, and engineers keep the systems running smoothly when the ship gets damaged. All six crew members must work as a team to successfully fly the Millennium Falcon through Smugglers Run and gather the needed cargo. While the ride itself is enjoyable, it’s the entering and exiting of the ride that’s the most exciting. The detail and accuracy will make you feel as if you’re genuinely in the Millennium Falcon and Han Solo will turn the corner any second. If only.

Star Wars: Galaxy’s Edge is an unparalleled theme park experience that far exceeds any of Disney’s previous additions in both scope and immersion. No detail has been overlooked, and even the most casual Star Wars fans will have a hard time containing their awe and excitement upon first seeing the land. From Oga’s Cantina to the full-scale Millennium Falcon, Galaxy’s Edge is a dream come true for multiple generations of Disney-goers, which is why it’s IDG’s #SundayFunday recommendation this month. Man your wallets, and may the Force be with you.