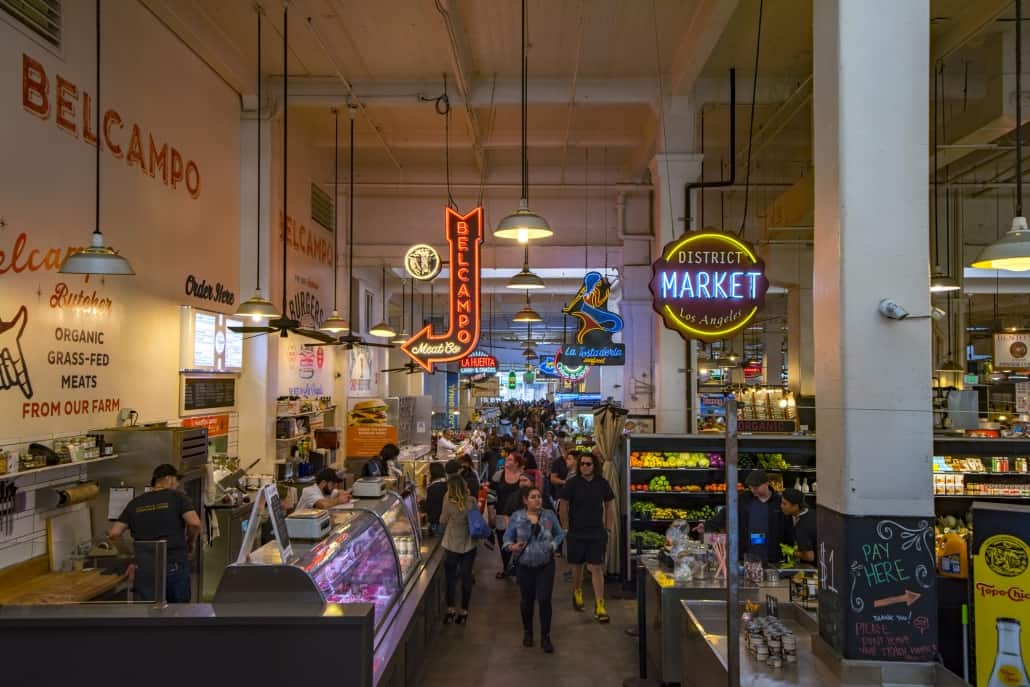 What’s better than delicious, fresh food and ice cold drinks on a summer Sunday? Here at IDG, we think the answer is nothing. That’s why we’ve chosen LA’s Grand Central Market as this month’s #SundayFunday destination.

Grand Central Market in Downtown LA is a 102-year-old marketplace that has transformed over the years from a local grocery market to a vibrant multicultural casual dining experience. Located on the ground floor of the Homer Laughlin Building on South Broadway, Grand Central Market was first opened in 1917. It was opened there due to its close proximity to the Angels Flight Railway. In the early days of its opening, wealthy residents living in Victorian mansions on Bunker Hill would ride the railway down to the market and purchase their groceries. There were over ninety vendors that included greengrocers, fishmongers, butchers, delis, and more.

Today, Grand Central Market is a hugely popular eatery for residents and tourists from all walks of life. It boasts more than 35 vendors that provide locals with delicious offerings from every corner of the globe. It’s become famous not only in Los Angeles, but across the country, for its wide selection and vibrant atmosphere.

LA’s largest and oldest public market received a revamp several years ago when the owners started gathering new vendors to transform the space’s selection. While they still maintain their classic grocery vendors, they’ve welcomed a new generation of food stalls that offer everything from Japanese bento boxes to Mexican street food and classic-with-a-twist burgers. Famous hamburger vendor Eggslut regularly has a line of eager and starving customers that wraps around the stall and runs halfway down the marketplace. Previous #SundayFunday subject Golden Road Brewing has a stall that offers ice-cold beers to help you through the summer heat. McConnell’s Fine Ice Cream rounds out the meal with unique flavors such as Turkish Coffee, Eureka Lemon & Marionberries, and Chocolate Covered Strawberries. No matter what you’re in the mood for, Grand Central Market has something for everyone.

Even once you’ve stuffed yourself with delicious food, Grand Central Market can still be enjoyed for the lively atmosphere that has made it what it is today. Dozens of neon signs, hundreds of wandering locals, and an entire neon wall mural make it an Instagrammable dream. Even if you don’t indulge in any of the mouth-watering options available, just wandering through Grand Central Market is a worthwhile experience in itself.

Although Grand Central Market won’t allow you to fully escape the heat this summer, it will surely serve as a temporary distraction as you become entranced by the neon lights, the lively buzz of conversation, and the smell of delicious food being freshly cooked. Los Angeles life is known for two things: rich multiculturalism and delicious food. Nowhere is that experience more well-encompassed than at Grand Central Market. It’s a must-see for anyone living in or visiting Los Angeles, which is why it’s our #SundayFunday selection this month.

How Much You Should Spend on Paid Advertising